This picture was taken at the Mana Club's Duck Creek circuit in 1962. The circuit no longer exists and kart racing in the Wellington area now takes place at the Kaitoke Raceway.

The kart in the front was a "Go Kart 1200" built by Andy Fleming and driven by brother Bob, from plans kindly supplied by one of the pioneers of kartsport, Duffy Livingstone from the Go Kart Manufacturing Company.

This kart, which was state of the art in New Zealand and probably up with the best in the world at the time, featured magnesium wheels, hollow rear axle, split aluminium rear sprocket, air heart hydraulic disc brake, and was powered by a McCulloch MC30 using twin carbs mounted on VanTech manifold. Early in 1963 the kart was equipped with a Max-Torque clutch and was started using a belt drive from an electric starter. And all these parts in a time when NZ had very severe import restrictions!!!. The crash helmet was even imported. It was a Les Leston helmet as used by the F1 Grand Prix drivers at the time. Barry Jonathan in third place is also wearing one. Second, in the picture behind the leader Bob Fleming is David Chown powered by an MC30. 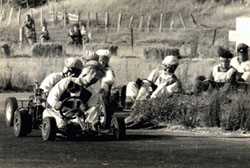