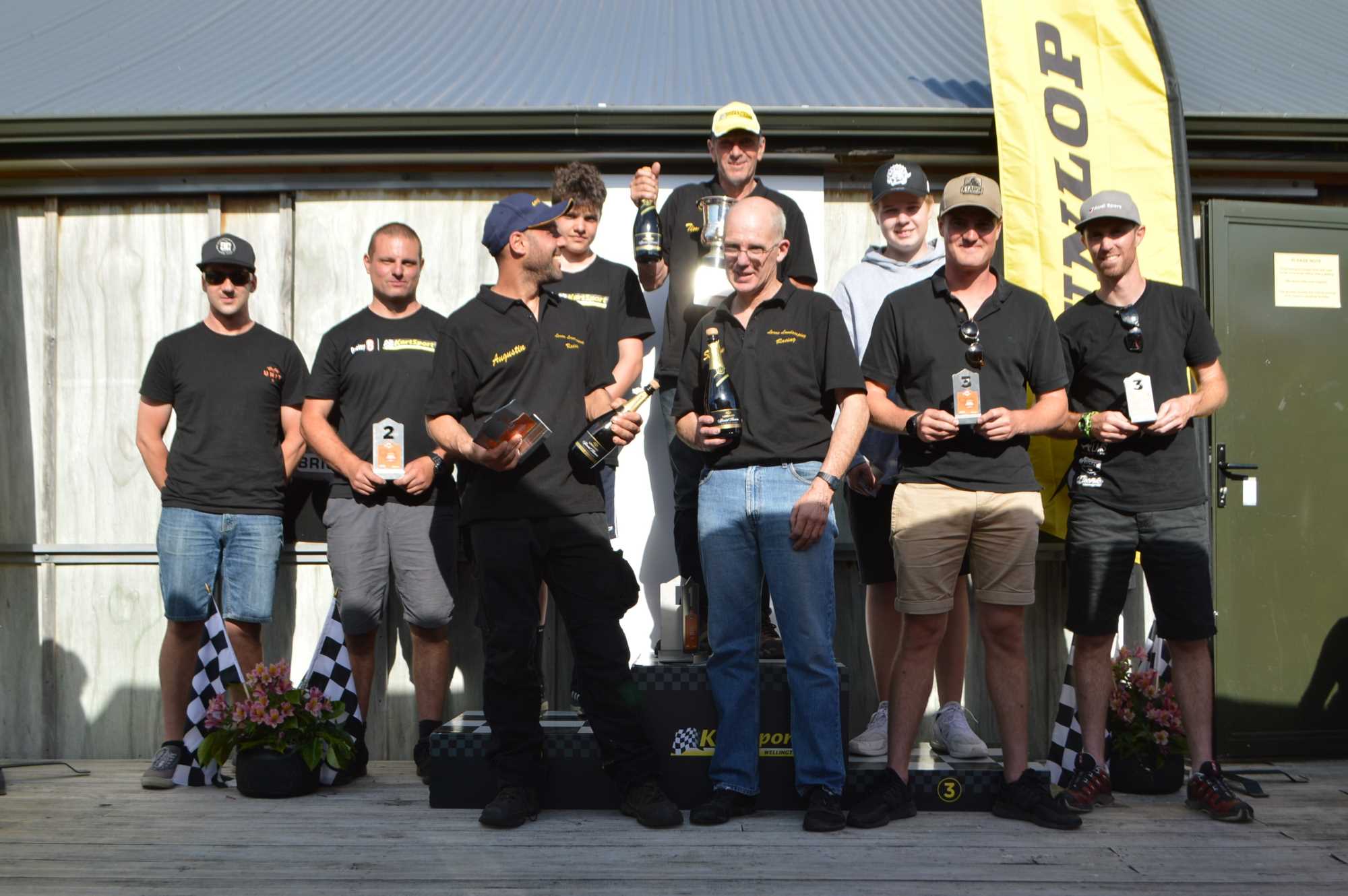 If ever there was a ‘proof of concept’ result it was this one; where three KartSport Wellington club members, Tim Hobbs, Stirling Hughes (since 1993 no less!) and Augustin Gonzalez, took on the might of a number of more highly-rated teams, and won KartSport New Zealand’s inaugural Briggs National Endurance Championships title in Wellington on Saturday.

The trio, who formed the Lexius Landscaping Racing team specifically for the inaugural Briggs National Endurance Championships event at the KartSport Wellington Club’s Gazley Raceway at Kaitoke, did it in style too, enjoying a trouble-free four-hour run to the flag to complete 334 laps, three more than their Team Chronis Racing clubmates, father and son Alex and William Chronis, and mate Brendan Cantwell.

Not surprisingly, they were one of a number of the 12 teams that entered the inaugural NZ title event for Briggs LO206 4-stroke engined club karts, which lapped quicker than the winning trio.

“It’s one of the oldest clichés in the motor racing book, but it was proved again today; to finish first, first you have to finish. And that is exactly what Tim, Stirling and Augustin did, and they achieved a dream result. All three are absolutely salt-of-the-earth clubbies, genuine guys who are the heart-and-soul of the Wellington club.”

The trio – Hobbs, 61, Hughes, 50 and Augustine a relatively youthful 37 - drove with metronomic precision, great strategy (stopping just twice for driver changes and fuel) and reliability, continuing to lap the 787 metre KartSport Wellington Gazley Raceway as those around them were slowed by drive chains coming off or - in the case of  the Triple H Racing entry of fastest qualifier Arie Hutton and teammates Christian Hermansen and Hadleigh Coffey - a broken seat.

The other highly-rated team, the Wilford Motorsport squad of the club’s current President Brent Melhop and fellow Briggs LO206 class sprint racers, Shaun Croskery (club Vice President) and Mike Love, also had their challenge blunted by drive chain issues, though they were able to recover and finish in fourth, just 8 seconds behind the third-placed Giltrap Group team.

Chambers, who at age 38, now spends most of his time at kart tracks around the country coaching the next-generation of young Kiwi world-beaters, arguably spoke for most of the 36 drivers who entered the inaugural Briggs National Endurance Championship event by admitting that getting back behind  the wheel himself in the event was ‘harder than I thought it would be.’

Once he got into a rhythm, however, he said, he was away and is keen to return next year.

“Ten minutes, in, even 20 it was pretty hard, but once I got to the 30-40 minute mark and wasn’t worrying about racing anyone around me it was awesome, heaps of fun and I’m really glad I made the effort to come down here and do it.”

The first true endurance teams event with a bona fide KartSport New Zealand championship title attached, it was a true long-distance race for up to three drivers sharing the one Briggs LO206-engined kart over four hours.

Each driver had to spend a minimum of 1 hour behind the wheel. A Pace/Safety Kart, with backing from current KartSport New Zealand sponsor partner Carter’s Tyre Service, was used twice to neutralise the field so that volunteer Flag Marshalls could be relieved during the race.

KartSport New Zealand President Graeme Moore, said he would like to thank primary event sponsor Briggs & Stratton and Pace/Safety Kart sponsor Carter’s Tyre Service for their generous support of the inaugural event and that planning for next year’s has already begun.

Prepared by FAST COMPANY on behalf of KartSport New Zealand. To find out more about KartSport in New Zealand contact Ross MacKay on 021 677 919 or via e-mail at ross@fastcompany.co.nz